THE THEATRE OF MISTAKES at RAVEN ROW

Posted on June 17, 2017 by anthonyhowelljournal

Here are some lovely images from our workshops at Raven Row – Summer 2017. 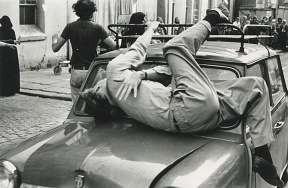 This blog carries a lot of material about the 1970s company that pioneered performance art, including footage of performances.

In Case There’s a Reason: The Theatre of Mistakes

Artists’ group The Theatre of Mistakes (1974-81) pioneered a structured performance art traversing architecture, choreography and poetry as well as visual art. They formed in London in the early 1970s from a series of open workshops at which instructional and games-based exercises were the focus. These came to inform The Street (1975), a performance with the residents and environment of Ascham Street in Kentish Town.
Fiona Templeton and Anthony Howell distilled the performance exercises into a publication, Elements of Performance Art (1976), arguably the first manifesto for performance art in the UK. A core group of six performers (Mickey Greenall, Glenys Johnson, Miranda Payne, Peter Stickland as well as Howell and Templeton) then agreed to produce contained and systematic works for a five-year duration. Later, ‘mistakes’ were explored through a series of trios, duets and solos and Julian Maynard Smith joined the core group.

The live element in this exhibition will commence on the opening night with a ‘Free Session’ by The Theatre of Mistakes, including early members. Throughout the exhibition, Anthony Howell will run performance workshops every afternoon, while each Friday and Saturday evening there will be performances of Going (1977). Directed by Fiona Templeton, a cast of five will play out mannerisms of departure in five tightly choreographed acts, whilst attempting to be each other.

The Theatre of Mistakes logged its working life, practice and processes in detail. The exhibition reveals this unique legacy of documentation and notation, and includes videos, photographs, a great variety of spatial and choreographic notations, as well as diary texts.