A Poem by Alain-Fournier – and a review!

Posted on December 2, 2016 by anthonyhowelljournal

Finally, a review   in the Manhattan Review of our versions of Alain-Fournier’s Poems 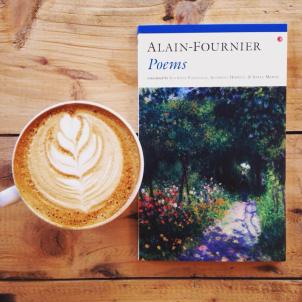 FROM SUMMER TO SUMMER

Through summers listless in each yard,

Summers which pour down their ennui in silence

Under the ancient sun of my afternoon

Made ponderous through silence,

By loners, lost in visions of love:

Loving beneath the wisteria, its shade

Gracing the yard of some peaceful house

Spread across my own distances

And my own infantile summers:

Those who dream of love or weep for childhood.

It is you, it is you who have come to me,

This afternoon which lies

Baking in its avenues,

Come with a white parasol

And with a look of surprise,

Quite solemn as well,

And a little bent over,

As in my childhood

And of course you’re surprised that,

Without planning to have come

Or intending to be blond,

You have suddenly found yourself

Here in my path,

And as suddenly you have brought

The freshness of your hands,

While bringing in your hair all the summers of the earth.

And even my sunniest dream

Could never dare imagine you so beautiful,

And yet, right here and now,

Right here and now, up close to you,

And how proud you are, and such a proper damsel,

A little gay old woman on your arm;

And it seems as if you choose to lead,

At a leisurely pace surely, and practically

Beneath your parasol, me to the summer-house,

Yes, and to my childhood’s dreamy place.*

To some peaceful house with nests in its roofs,

While, within its yard, wisteria shadows the doorstep,

Some lovely building with two

Turrets and maybe a name

We used to enjoy in July.

See, you have come to spend the afternoon with me,

Where? Who knows? In The Turtle-Dove House?

You are going in, you are entering,

Through all the sparrows’ chit-chat on the roof,

Through the shadow bars of the gate that shuts behind us,

Shaking down the petals of a climbing rose:

Down onto flower-beds, borders with green benches,

And down each allée festooned as if for a saint’s day.

I’m coming too, we are tracing, together

With your dear old thing, this oh so lovely allée.

It’s where, this evening, your dress,

On our return, will gather up softly

Scents that are coloured by your tresses.

And then to be allowed, the two of us,

In the dark of the drawing room,

Such meetings as enable us

To celebrate the ritual of sweet nothings.

Or beside you now, reading near the pigeon loft,

On a garden bench where the chestnut

Wafts its shade, using up the evening

Reading to the coo of those doves who are startled

Merely by the turn of a page.

Let’s choose a novel of some noble age,

Stay out there, till supper, until nightfall,

Right up to the time when pail gets drawn from well,

And on cooling paths the play of children can’t help but amuse.

It was there, to be near to my ‘far away’ fair

I was going, and you never came,Though my dream was to dog your steps,

But only my dream ever got to you,

Got to that castle, where sweetly vain,

You were the châtelaine.

It was there that we were going surely,

That Sunday in Paris, along that lointaine

Avenue made to comply with our dream?

More silent, ever more lengthy, and empty ever after . . .

And then, on some deserted quay, on a bank of the Seine,

And then after that, even closer to you, in the boat,

To the quiet purr of its motor through the water . . .

Here is a link to Alain-Fournier’s Poems

and here is my short essay on Alain-Fournier published by the Journal of Poetics Research .

Alain-Fournier died while fighting near Verdun, on the French/Belgian border, on September 22nd, 1914, one month after the outbreak of World War 1. His few poems seem drowned in outdoor light. We sense the breeze on our skin, the heat warming the stones and the grass, as much as it warms our bodies. It strikes me that he is a Fauve. The Fauve explosion culminated in the glorious paintings the group produced in 1905-7, just seven years before Fournier’s death. I look at the paintings André Derain painted near Cassis, and I sense from the smearing of orange on roofs and sunlit slopes, that the artist was painting the heat as well as the light. And Fournier is also evoking heat as much as light. He is more interested in the intensity of his perception than in some impression of reality.

He is very aware of colour in his poems, but his eyes are not divorced from the other senses. He celebrates texture – little dresses and dishevelled silks, a straw hat, a satin parasol – and sounds – the sobbing of a piano, the pealing of bells for weddings, the snoring noises of combine harvesters. Lavender is gathered to the sound of the bells, and thus we become immersed in his experience through all our senses. And very often this is an experience of the outdoors. Interiors are dusty, out of focus in their corners, the shadowy realm of the aged who maintain the hearth, often asleep behind lowered curtains.

What is extraordinary is how this small oeuvre – fourteen poems in all – so utterly engages us in a plastic world of light, sound and atmosphere, and since it’s nearly always a sunlit world, it seems that the greatest threat can only be a shower.

Alain-Fournier is well aware of his own typicality:

We were twenty then, in our thousands.

Our love-sobs strayed across the town.

His poems are unashamedly adolescent. They are often constructed like brief stories, and they unfold their own narratives, culminating in endings which are also always presenting us with the presiding image of the poem.

However, an exception to this lyrical view of his poems is Road Song:

One invader, then all of them, sing:

We caught the fever

Caught the fever and we went away.

We had been warned

That we would discover

Nothing but the sun

In the depths of your forests.

We have been through stories

Now in this poem the sun becomes incendiary, explosive, lethal, and it is through reading it that one begins to notice that for Fournier the sun is not always benign. Actually the hearth indoors has a more human warmth. The sun is always there in the poem, or noted for its absence, but there is the sense that what nourishes can also prove malignant, eager to destroy – and outside human control.

This malign sun is the dominant force of The Sun and the Road. The sun beats down on the road with a white heat, and:

Above all else it’s him I see, as the sun heats up for joy;

This boy who has lost to that dusty wind that blows,

And I see him on the road, chasing after it,

And lost to the march past of belles with their beaus

By the sun, and by the dust and by his tears.

There is often a woman who is the focus of attention, sometimes an old woman, a woman who epitomises the ways of the village, the spirit of the country existence that is being celebrated (and with hindsight we cannot help but sense the poignancy of this rendition of a world that will be gone before the war that kills the author has come to an end).

More often she who he addresses is at least as young as the poet, possibly younger. She is regularly spoken to in these adolescent poems, this girl by whom he is smitten. Again, there is a sense of his awareness of the typicality of all this: adolescent poems addressed to her, the one you have a crush on. But it is with considerable skill that Alain-Fournier gets us caught up in the imagined dialogue that could almost be a pastoral eclogue, for there is a sense of us inhabiting a terrain, of walking through it, going in and out of hedges, through gates or along little lanes. His poems are idyllic journeys through a landscape soon to be blown to smithereens.

Tale of the Sun and the Road

(To a little girl)

There’s a little more shade in the squares

Beneath their chestnut trees,

There’s a little more sun beating down now on the road.

In ranks of two, a wedding passes by

On this stifling afternoon  − a long bridal procession

In all its country finery, remarked upon by everyone.

Look how lost in the midst of it all are the children,

Their fears and upsets ignored.

I think about the One, and one little boy who resembles me.

A light spring morning, under the aspens,

He is alone, although he’s been invited,

And at this summer wedding he says to himself,

“What if they place me in line next to her,

The one who makes me whimper in my bed?”

(Mothers, do you wonder of an evening,

About the tears, the sadness, the passions of your children?)

“I’ll wear my big white hat made of straw,

My arm may be touched by the lace of her sleeve,

As I dream her dream in my Sunday best.

She’ll be sweetly leaning, on my arm.

And softly say to her, “Mademoiselle…”

But firstly, well, in the evening, perhaps,

If we’ve walked a long way, if the evening is fresh,

I will dare take her hand, I will hold it so tight.

I will speak the truth until I’m out of breath,

And closely now, without the need to fret,

I will say words so tender

That her eyes will go all wet,

And with none to eavesdrop, she will answer…”

So I dream, as my current glances fall

On a mundane groom together with his bride,

Such as one views on any baking noon,

Poised above the steps of a town hall

Then spilling out to music onto the blinding street,

All in their first-time outfits;

Dream, in the dust of this processional affair,

Where two by two go by, the girls with their noses in the air,

Girls in their white, with lace-embroidered sleeves,

And the boys from the big cities, maladroit,

I dream about those small forgotten boys;

Dream about the village boys, those impassioned lads

Jostled at a rhythmic pace in these absurd parades;

– Of others caught up in the rhythmical process, confident

And pulled along, heading for a liveliness

Which loves to make a noise, peal without a purpose.

– Of the very smallest – going up and down the rows,

Who can’t find their mummies, and one above all

Above all else, it’s him I see, as the sun heats up for joy;

This boy who has lost to that dusty wind that blows,

And I see him on the road, chasing after it,

And lost to the march past of belles with their beaus

By the sun, and by the dust and by his tears.

1 Response to A Poem by Alain-Fournier – and a review!