Posted on July 7, 2020 by anthonyhowelljournal

THE LOVER OF NATURE 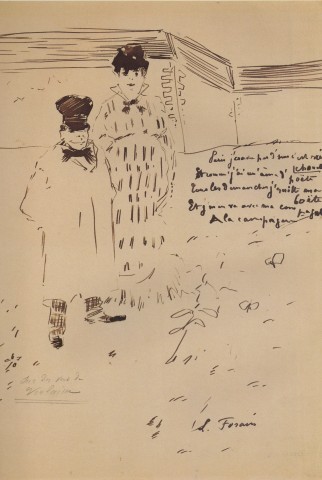 Paris being not a spit

Worth spittin, I am gonna split.

Sundays when me gaff I quit,

The country’s bout as cool as shit.

Cartin’ us out past the suburbs

Into bits of blue for yer

Where the bubbly may not flow

But’s on the out an where we go.

She puts on er Snow-white frock

My white pipe’s what I gets out

Ain’t no shirt, but I got cuffs.

Helagance reigns. They oik out roughs

From where we likes to stroll about.

Ere we are, doll, how bout that?

Seems my tool is what you covet.

Even should it get me snorted,

Can’t be worse, just get it sorted.

The poem came out in 1890, but was written around 1871 (time of the Franco-Prussian War – when Forain was a friend of Rimbaud and Verlaine). However it was wrongly given the title “A Rogue takes a Stroll in the Country” by Huysmans in his Modern Art. Forain did a notebook of watercolors inspired by each verse of this poem, and this is one of the two which survive. He also did this wonderful sketch of Rimbaud. 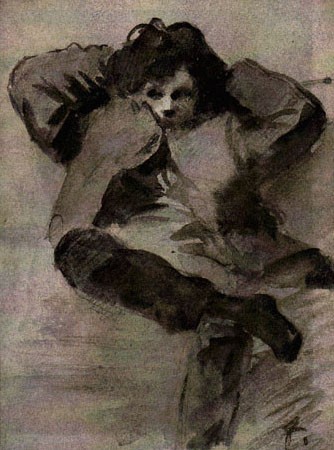