Posted on October 16, 2022 by anthonyhowelljournal

The father of meteorology!

Here is a link to the exhibitions page at The Room

When, from the water’s quiet mirror,

And the moon, wrapped in its undulations,

Revels in a haunted, haunting play,

Then we are pleased as children;

Watching it lift up the mountain,

Deepen and then spread,

Bar after bar, to become the sort

Of lowering sky that can go either way:

Soak us or pass on, overhead.

And if from there it should be raised

Up to a thinner atmosphere

How firmly based, how crisp it seems,

Towering, gathering all its splendour

For a proclamation on the plenitude of power

(Since what we fear may well be our fate).

We tremble in the shadow of its threatening.

Into a heavenly lightness,

A mere something there that dissolves

Ever so softly; less than a patter of fleeces

Upwards from below, towards

Their Shepherd, into his lap and hand.

Yet all must be brought down

By the weight of our world.

Pierced, when dense and very large,

The stack must thunderously

Discharge, as armies do that roll out

In splendid array only to disintegrate;

The earth then receiving their remains.

But keep the eye on where it frays,

Describing what comes down while feeling

That it’s upwards we should always gaze.

Goaded by a breeze, it sways,

As if some flimsy palanquin

It glories in continuous metamorphosis,

Can you see it and believe your eyes?

Trust to the strength of your own projection,

Choosing to define, while the indefinite

Ramps a lion or unfurls an elephant

Or turns a camel’s neck into a Jabberwock

– Until the army of barmy

Images wrecks itself on a rock.

The trumpeter heralds his own dissolution

Well before a judgement can be sounded.

Yet Howard gave us an instrument

For getting the airborne grounded

By latching on to the gone, and firming up

The ephemeral.  He was the first to hold it fast

For which the planet offers thanks.

Both versions by Anthony Howell

The story goes that when Luke Howard received these poems in the post he could not believe that they were really from Goethe and threw them into the waste-paper bin!

And please put in your diary the 22 November – Poetry reading on ‘The weather’ – open mike – starting at 7 pm at The Room.

Odin at the Well

Posted on October 15, 2022 by anthonyhowelljournal

My friend, the artist Anthony McCall, gave me Thinking in Circles: an essay on ring composition by Mary Douglas. He observed that much of my work in performance art and in writing has had a circularity to its composition. His visit coincided with a talk I went to by the physicist Carlo Rovelli and the artist Cornelia Parker at the Conway Hall. Quantum theory, mythology and circularity somehow came together to inspire this longish poem.

Were one to read it in one go, the circularity which is its kernal and its perimeter would become apparent. But that is a tall order, I realise. Next year I hope to work with the poet/dancer Scott Thurston on a performance where I may recite the poem to accompany his actions. Meanwhile The Fortnightly Review have just published the poem in its entirety, much to my amazement and joy. The link is below:

Odin at the Well

Posted on October 15, 2022 by anthonyhowelljournal

Romance at the Demo

Posted on October 9, 2022 by anthonyhowelljournal

It’s warm but not quite hot. Under the blue, in our anoraks

We are lining up to surround Westminster

Bringing with us our hands. Yai, my friend from Thailand,

Only a year or two younger than I am, takes a photo

Of me remembering to suck my midriff in,

Halfway across the Thames. Then I lean my back against

And a pretty young woman takes up the space to my right.

Lock up ugly Patel! We laugh, as slogan-banded crowds

Head past us, bemusing the tourists on the bridge’s

Other side that faces London’s looming wheel.

Everything feels large from here. More and more of us

Surge on so as to continue our chain along the far embankment.

We’ll need more than this, we think, but a whistle-headed one of us

Continue to increase this encirclement of our vindictive

Houses of parliament. The wench beside me pulls her velvet

Outer-wear over her blond head since it’s grown suddenly hot.

Yai leans into my left. She’s messaging relations in Bangkok,

Puzzled as to what she may be demonstrating about.

Meghan’s come down from High Barnet – thirty something

And, I must confess, still am at high tide, enjoying this October blue.

Our chat is a matter of lively responses, though just as I

Suck in my midriff for a pic, I am trying to keep in check

That passionate part of me, my heart. My own years

See other years from an altered point of view

Yet with the same appreciative eyes. How will I remember her,

How visualise her upturned face, I ask myself

At seventy-seven – no longer even sixty-nine –

The demonstration taking second place in my attention.

What a fraud I am! Pulling out my latest collection

To give to her, brought with me especially

For such an eventuality as this has just turned out to be.

But now it’s time for all our hands to join

And I have Yai’s in mine and Meghan’s. Is this bliss or what?

I sense our fingers forming an intimate knot.

The Thames runs glittering past below our feet.

Posted on October 4, 2022 by anthonyhowelljournal

The above link also leads to a selection of poems in the book.

Very pleased to see it out, and many thanks to David Cooke.

Posted on September 26, 2022 by anthonyhowelljournal 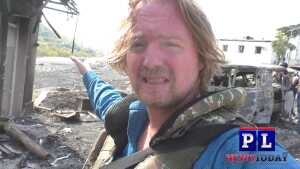 Here is Patrick Lancaster reporting and here is the BBC
Within hours of each other, covering the same event.
The door to door voting is for convenience and safety, not for intimidation. Why is the BBC so partial? The news is bent in a direction contrary to the truth, while reporters like Patrick, an independent, right there in Mariupol or similar places in other states voting today, show exactly how the residents feel. 70% keen to be part of Russia and all blaming Ukraine for the horror. These referenda are far less a sham than Biden’s electronic shananigans.

Posted on August 31, 2022 by anthonyhowelljournal

I am also excited that Grey Suit Editions has two new titles, coming out in October/November:

All books can also be ordered through Tangoshiva on ebay

For trade deals on all my books or Grey Suit Editions contact editorial@greysuiteditions.co.uk

‘Envelopes’ – published by The High Window

Posted on August 15, 2022 by anthonyhowelljournal

I am very pleased indeed that this poem has been published in The High Window. Thanks to the editor David Cooke for all the final sleuthing that it needed.

Here is a video of Lombardi at work and discussing his death. Since his drawings showing interlocks between clean and dirty money are very large, they do not reproduce very well.

However there is a brilliant book – Interlock: Art, Conspiracy, and the Shadow Worlds of Mark Lombardi by Patricia Goldstone that goes into his drawings in detail.

There is also an excellent obituary of Lombardi in Adrian Dannatt’s Doomed and Famous.

A sort of ‘Brief Lives’ for the twentieth century, this book is a wonderful selection of obits which includes such luminaries as the elusive James Lee Byars, the unique performance artist Stuart Sherman and the wonderful painter Larry Rivers – all of whom I knew – and the experience of knowing them was formative for my own creative thought.

Oh, well, anyway, Everything is a Rich Man’s Trick!

Mind you, it is worth noting that this documentary was completed in January 21, before we realised how weak NATO actually is – because so corrupted by the CIA and the Mafia – yes – and by US weapons costing an exorbitant amount to the US tax-payer because of the huge profit margin the middlemen demand (which means the weapons aren’t actually worth the dollars they cost). To imagine Russia and China are weak today is false. Russia is winning hands down against oligarch-corrupted Ukraine and sleepy Joe and his son, heroin-happy Hunter, who was in the pay of Kolomoisky’s Burisma energy company. So I take the conclusion of this documentary with a pinch of salt, and I get irritated with its knee-jerk equation of fox-hunting with the upper classes, a sentimentalisation which underscores that tendency to turn socialism into an empathy notion which has damaged country sports, the rural nature of the counties and workers’ employment in the countryside.

The Script of Storms by Michael Hersch

Posted on August 8, 2022 by anthonyhowelljournal

I am very pleased that the composer Michael Hersch has set several of my versions of the poems of Iraqi poet Fawzi Karim to music in his new work THE SCRIPT OF STORMS – featuring the work of Christopher Middleton as well as that of Fawzi Karim.

Click Fawzi Karim – for more about this internationally renowned poet.

So let us now praise exodus,

While checking inside the receiver

and under the car.

as those who are exiled already

praise those of us who are exiled after them.

Unto them let’s advertise our attractions

And publicise our qualities to disbelieving lands.

Our travel songs are shanty towns

and the sun goes wailing through their slats.

Who dare join their voices to our own?

from its first cocoon

to its children tumbling down the vale.

And let us praise our mourning songs that race us to the sea.

Hallelujah, exodus!
No one’s cheered as loud before,

And wandering through us, the slain are on tour.

They pillow their heads on our eulogies,

And, as the light goes out of their eyes,

we praise that dying light.

Here we stand, at the summit of Mount Memory.

Our wishes are wolves in the desert:

the sacred springs of blood,

And the sand soaks up our wishes.

Let us praise the dullness

that drains all color out of things,

And, from the lands of the living,

sing of the lands of the plague.

I am also pleased that my libretto Aquileia A Capella has been set to music by Robert Stuckey, and a full recording of it will be made later this year, with a live performance created in 2023.

Tangoshiva – my selling site on Ebay

Posted on August 1, 2022 by anthonyhowelljournal

For books by Gwendolyn Leick, Iliassa Sequin, Donald Gardner, David Plante, The Theatre of Mistakes and myself.

All recently published books by myself or by Grey Suit are now listed on Tangoshiva. This is the link for my selling station on Ebay – for the Grey Suit Editions backlist and for publications by The Theatre of Mistakes – as well as other publications of mine.

For Trade Distribution it is best to contact: Ingram Publisher Services UK –

Which is the best contact for enquiries about readings by Grey Suit authors, launches, further trade deals and enquiries.